We Are Getting Closer- Early Spring Hotspots!

We Are Getting Closer- Early Spring Hotspots!

By my calculations from mid-February, we should be seeing the first wave of migrating schools of striped bass in Rhode Island waters in about seven weeks. Those first fish typically show in the Pawcatuck River near Westerly, RI so if you feel like braving what will still be very cool waters and air temperatures, boat and shore anglers should be catching by the second week in April. (For the Pawcatuck River a good place to get access is the cemetery off Beach St (RT1A) between Watch Hill and Westerly).

Where else should you explore? Man, the list goes on but the second most likely spot to hit early stripers is on the West Wall near East Matunuck State Beach. Be prepared to share the jetty with everybody and their brother, but if you can get to the end of the jetty, it is without question the optimal spot. If the West Wall is packed with early (or late) birds, then try the East Wall which is accessed from the Narragansett side of the Pt. Judith Pond breachway. If you know how to get to the Pt. Judith lighthouse, on your way there look for a sign marking Camp Cronin. Not as great a place as the West Wall, but definitely less crowded and the bass should be within reach. (Bring a spinning rod in case they are beyond fly casting range).  Two other reliable spots to check out are the east and west corners of Sachuest Beach aka Second Beach in Middletown.

The best times to go are typically the early morning and late afternoon. Be prepared to be cold and of course wet if there is any kind of shore break. Use small patterns on Intermediate lines (also bring a spinner to make life easier if you are facing a head-wind.) For any of these early season striper spots I would suggest Clouser Minnows and Lefty's Deceivers... no magic here, the fish will be small but after this prolonged and cold weather...a good tug on the end of your line will be welcomed.

That's nice Jim, but where are your other secret spring spots?         Well, here 'ya go Mate- but they really aren't so secret, after all, native Americans fished many of them hundreds of years ago! 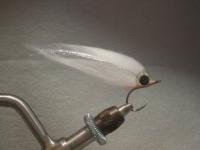 Narragansett-- Bonnet Point at east end of Bonnet Shore Beach, Narrow River from the mouth of the ocean all the way to Gilbert Stuart brook

Bristol-- Mill Gut inside Colt State Park- fish on the drop. At the high tide explore the pond on the inside/ Bristol Narrows on the drop/ Cole River where it squeezes through the narrows near Ocean Grove- on the drop and at the Rt 103 bridge